Trading the Shin Splints in for Sand Legs

Melissa tells us why you can't suck forever

"Stop shotting and hit the ball hard!!" was a phrase I would hear from my indoor coaches often... hahaha. I didn't care. We got the point didn't we? So why does it matter the execution?! This was probably a big reason why I would often get told that I should play beach volleyball. Both my parents played professional volleyball in Brazil. Volleyball is in our blood. My brother played Division 1 volleyball for BYU and he also played professionally in Brazil. My sister played Division 1 volleyball for Weber State. I always joke that if we didn't play volleyball, we couldn't have dinner lol. I started to play volleyball when I was 6 years old. My parents would teach me how to underhand serve in our front yard with a very old and hard MIKASA white volleyball. I would remember hitting it pretty hard and high and they would cheer and shout for me because they couldn't believe I could hit it so hard when I was that small. I would leap with joy and just be happy not because I hit the ball, but because my parents were cheering so loud and seemed happy that I could hit the white ball so high haha.

I was pretty tall at a young age so of course I was a middle hitter by the time I reached 12 year old club volleyball. I wanted so badly to be a setter too for some reason. The problem with me being a setter was that my hands were extremely ugly and I would follow through with my hands like I was shooting a basketball. I mean I did like basketball more than volleyball during this time period of my life. I only played volleyball because it was kind of fun and my parents seemed to be super excited anytime I did something good. Anyways back to volleyball! I actually was pretty bad when I was 12. I was athletic but just not good yet. I was only on the Gold team because I was tall and athletic. I knew that the next year I probably wouldn't make the Gold team again. Towards the end of the season I remember improving immensely. I actually remember hitting an overpass straight down that everyone in the crowd gasped in shock that a 12 year old could hit like that. That was when I knew that I had some serious potential with the sport and finally started to enjoy it a little bit more.

Fast forward to the next year at 13 year old tryouts. For some reason I was extremely good during this tryout. It somehow just clicked for me and I was passing, digging, and hitting extremely well. I shocked myself, Maybe it was the jumping in my living room that helped me become a little more coordinated or maybe it was my parents prayers... who knows. All I know is that I freakin KILLED it and I had 100% certainty that I was going to make the Gold squad. Unfortunately I must've made such a bad impression on the 12's team that I did not make the Gold team I made the Black team instead. I was disappointed, but I didn't really care as long as we beat the Gold team every time we play them, or I did my best to destroy them every time.

That season may have been my favorite club season ever. It was very apparent I didn't belong on the twos team and every coach we played against asked why I was. I didn't care because I was the star hahaha. Every time we met the Gold team at a tournament I would get 20 kills and at least 5 aces. I could tell Scott Blackmon regretted not taking me on that team... (and it was apparent because he switched to coach the 16s team and didn't make the same mistake again, he took me on the Gold team and quickly became one of my all-time favorite coaches hehe.)

Fast forward to my Junior Year of high school when I finally was convinced to play in a beach volleyball tournament. Absolutely hated it hahahahah. I could not move nor jump and I never felt so unathletic in my life. I was sooooo confused why everyone told me I would be good at beach because apparently all I was good at was hitting in the net and tripping over myself LOL. Man I was bad at it and never wanted to do it EVER again!

My senior year of High School we won state. It was a surreal experience and one of the best days of my life! We beat Lone Peak High school in the championship 3-0 and they never scored more than 18 points. It was so amazing because we lost to them 4 times in a row during the regular season and they had 7 Division 1 players and we only had two. We were supposed to lose for sure and were ranked 4th coming into the state tournament. I ended up getting MVP of the league and the tournament with 25 kills in the state game. My high school went on to win 3 more times in a row and then got second 5 more times after that. We were ranked 22 in the nation my senior year and I was a high school All-American, Gatorade player of the year nominee, and national player of the year nominee. Indoor volleyball brought me such joy and so many accomplishments. I loved every minute playing and would play so free and fun all the time.

Eventually I got a full-ride scholarship offer to play at Central Michigan University. I did really well there. I started as a freshman and enjoyed playing volleyball. Unfortunately I missed my family a lot and it was negative 40 degrees on my birthday (they canceled school because your organs would literally freeze hahahaha Oh! and there was one TjMaxx and a Walmart and that's it!) so I decided that I wanted to transfer. While I was in Michigan my family moved to Texas so I decided to check out schools in the area to live by them. Houston Baptist University (yes it's division 1 lolllll) offered me a full-ride scholarship and they also said I could play on their newly founded beach volleyball team! I definitely remembered that I hated beach, but I also thought it would be an amazing opportunity to learn and NOT SUCK FOREVER!!!!

The first game of the season we played against the number 1 ranked team in the country at the time, FSU. HAHAHAHA man that game was extremely embarrassing. I think we lost 21-2??? And the only points scored were their missed serves and my free ball over the net on one when they served me. LOL I will never forget the look on the girls face when I did that like "Seriously?! man you SUCK!" haaha. I could hear the coaches saying "Serve number 5! She can't hit!" and boy were they right! It's ok though... because I was determined to not suck forever. I watched other teams we played against to see how they moved, jumped, and did things on the beach. I started to realize that nobody broad jumped. They set their feet down on the ground and jumped straight up. I started to do that in my next match and WOW I finally hit a ball down! It felt great. I slowly but surely learned the rules of the game and how to make it work with one other person and not 6. I had a lot of work to do and still do, but I learned enough to finally beat our first top 10 ranked team, TCU my Senior season.

After graduating with my undergrad from Houston Baptist I had one more season left of eligibility left and I transferred to play in the PAC-12 at the University of Utah. This helped me play against tougher competition and helped me see that playing at the next level is possible for me if I work hard. Now as I look back I can't even believe how I am playing on the FIVB World Tour representing the United States with players who play in the AVP. I can't believe I am training with world class coaches and Olympians. I can't believe that number 5 learned to finally hit.

... You really Can't Suck Forever if you keep trying <3 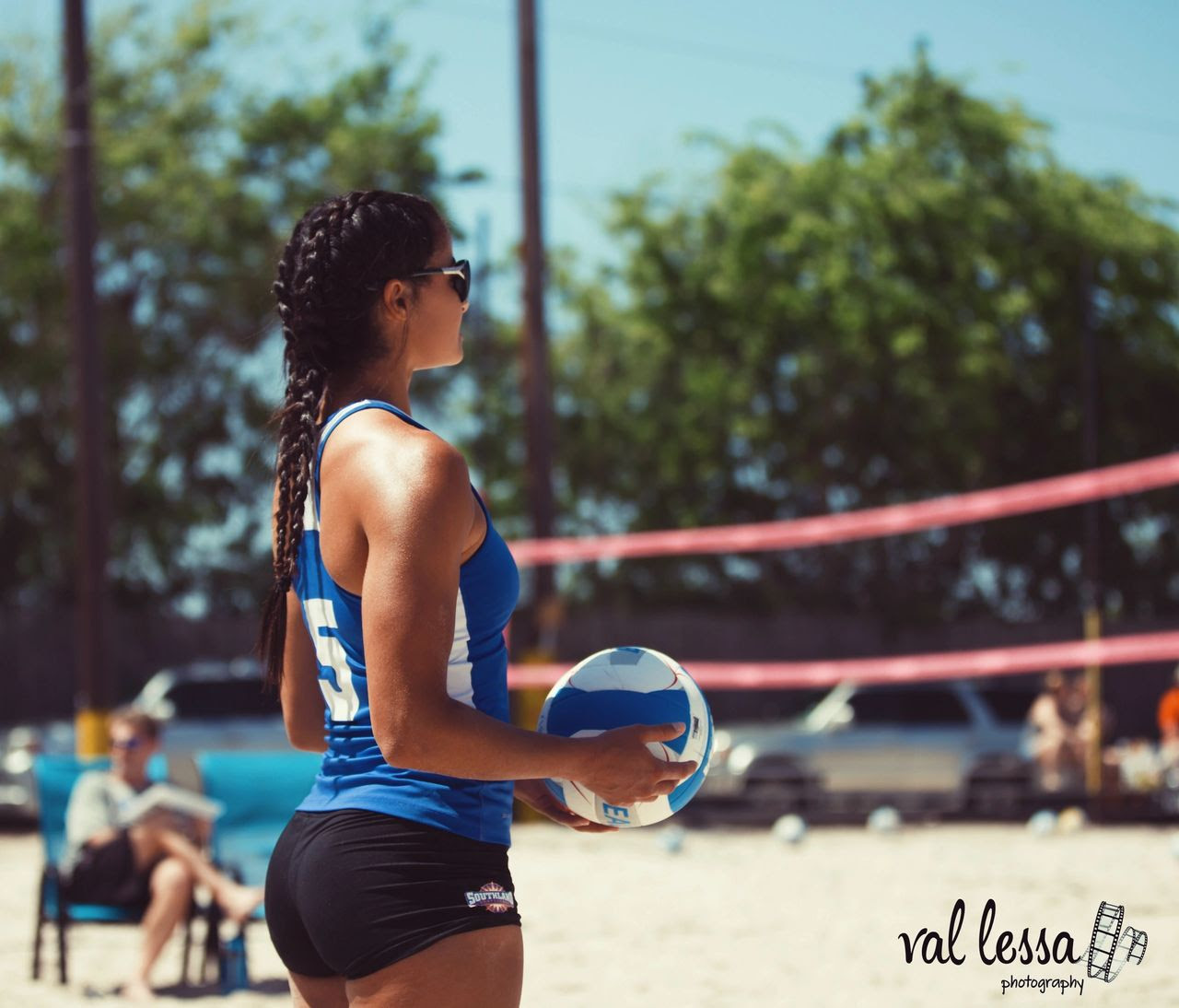