Sunshine on the West Coast

There’s something special about the beach volleyball community. It’s something intangible but undeniable and it hit me from the very beginning.

I’d been playing indoor for my state of Victoria for a number of years and enjoyed competing successfully at many National championships. I was a cog in a fine tuned machine and it was fun. We would train as a team, travel around the country as a team and compete as a team and then go home as a team. In 1990, I was asked to play with a mate at an Australian Beach Volleyball event in Queensland and that experienced changed my life. We trained as a team (but with other teams), we travelled as a team (but with our girlfriends), we competed as a team (but then went out and partied with the other players from around the country) and then we went home. This was different – this became family.

Fast forward to 1996 and I was living on the beaches of California. The indoor doors had closed but the beach doors opened and my sense of family exploded. I had stepped in the mecca of the sport and the first thing that hit me was the community. It was tribal, it was a lifestyle that was inclusive and fun. I played all day every day, got schooled by the literal Mayor of Manhattan Beach most days and found a home away from home.

I’ll always remember playing in the Manhattan 6-man (look it up) and with one more game to win to progress to the finals the next day I got a glimpse of something I’d never seen before. We were about to play Mike Dodd’s brother’s team (look up Mike Dodd) who were dressed in Flintstone outfits and ready to go. Who should rock up at the last minute to join the team but Mike Dodd himself (seriously…look him up) and another AVP legend Brent Frohoff. Now both Mike and ‘Fro’ had just made it through to the finals of the AVP event at Seal Beach the previous day, we’re on their way home and decided to drop in, put on a Fred and Barney costume and play purely for the love of it. Think about that for a moment… $200,000 up for grabs, and the next day they come along and play with their family and friends. We lost 16:17 but that changed my whole perspective on this game.

Estero was another example. Imagine a small holiday town in Mexico literally taken over by 2,500 beach volleyball players, playing on 250 courts over a weekend, complete with Olympic gold medallists and numerous AVP pros BUT, no one knew who they are going to play with before the event. In a ‘draw’ tournament your partner is drawn out of hat. What’s more, there are two hats. One for the ‘A’ players (pro’s, AAA, AA rated players) and the other for the ‘B’ players (A and B rated). Each team is made up of an A and B player. This was community…this was family.

Now imagine coming back to Melbourne where there wasn’t a single permanent beach volleyball court and only a very small number of players. Welcome back to Kansas Dorothy 😊. As fate would have it, the role to manage the Victorian Beach Volleyball Series opened up and I set to work on establishing permanent courts and building pathways – not just for the ‘elite’ but for the community. This became a business known today as VicBeach and I’m happy to say there are nearly 4,000 facebook Members and 18 permanent nets around the city including a 10 court public facility on South Melbourne Beach. It was all based on what I experienced on the beaches of Manhattan and Hermosa.

Fast forward now to 2018 and I had been living on the Sunshine Coast in Queensland for a few years. Volleyball wasn’t Plan A but I found myself getting involved with forming the new Sunshine Coast Beach Volleyball club and our first win was establishing 2 permanent courts on the beautiful Mooloolaba Beach. (It truly is ‘God’s county for beach volleyball!) Out of the blue, I got an email from Phil Moreland who I had worked with while coaching Natalie Cook and Tamsin Barnett to the London Olympics and Phil asked if I could help out with the Scottish Beach Volleyball teams in their preparation for the 2018 Commonwealth Games. Now a funny thing about this beach volleyball family is that you just know that no matter who someone is and where they are from, if they love beach volleyball…they are family.

So it was wonderful meeting my new family members, Martyn, Lynne, Mel and the rest of Team Scotland and I trust they all had a positive experience with us. We sure had a great experience and it really helped our new club establish relationships with Council and announce to the community that beach volleyball was in town. So soon after our courts were established and here we we’re hosting international teams and staging two evenings of grandstanded, under light exhibition matches involving male and female Scottish and English teams and some top level Aussies. (You’ll be pleased to know that Lynne and Mel beat the English team).

They told stories of training in a barn because their regular training courts had frozen over so it’s so good to hear that West Coast Beach Volleyball is building opportunities to play on the beaches in Scotland. One thing I’ve learned over the years is that this game works. It simply works. If there are opportunities for people to play and others to lend a helping hand to coach and welcome people into the family, growth is inevitable. So good on ya Team West Coast Beach Volleyball!! 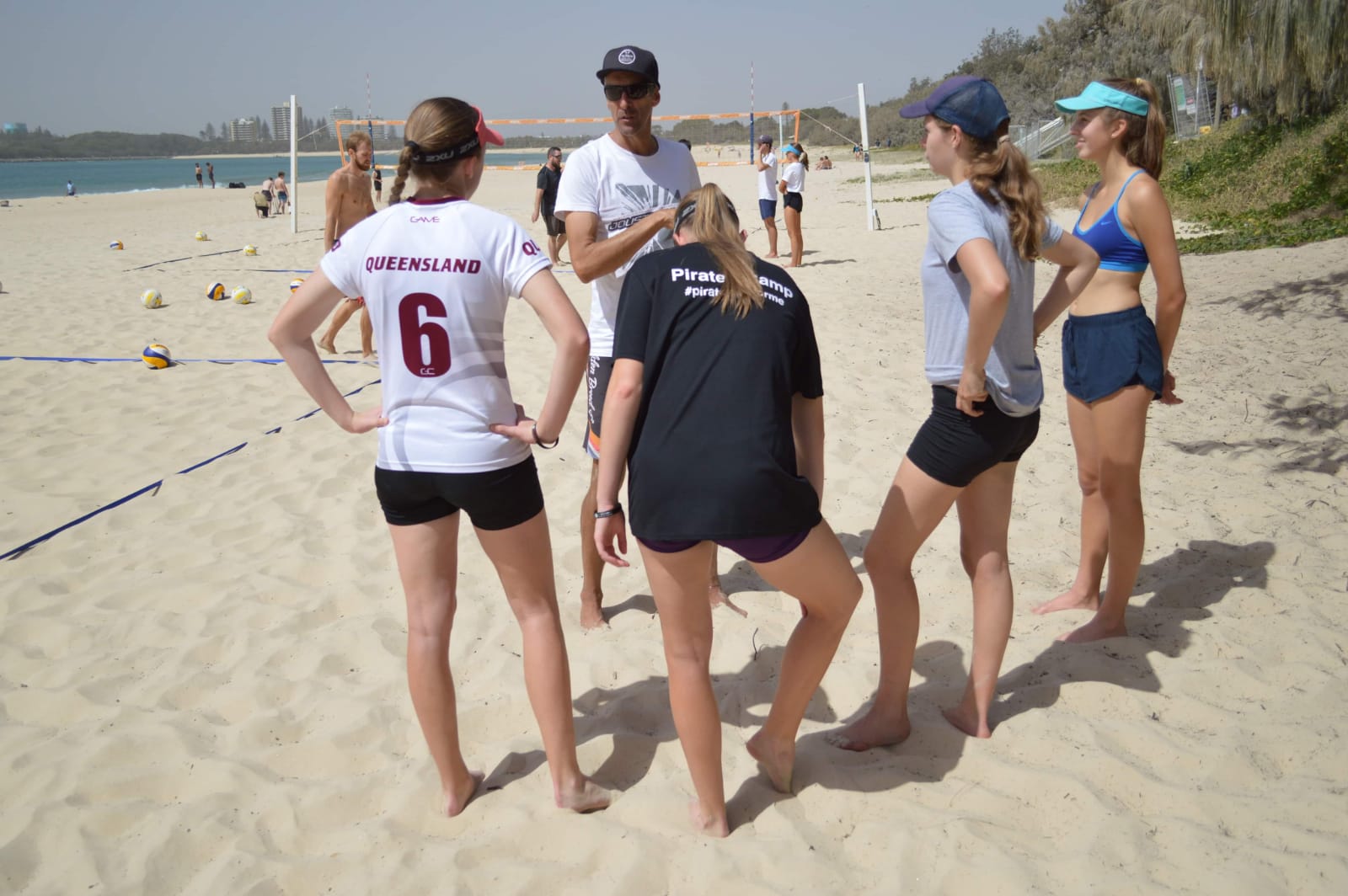